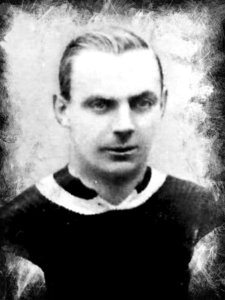 Charles William Wallace (1885-1970) was born in Southwick, County Durham on 20 January 1885 and died on 1 July 1970. A two-time FA Cup winner, Wallace played almost 400 games during his career and also won the league title with Aston Villa. During the First World War, Wallace served in the Royal Garrison Artillery and was capped three times by England.

Wallace began his career playing at outside-right for Southwick FC before joining Crystal Palace in 1905. After playing 70 games in two seasons for the Eagles, Wallace left London in 1907 to join Aston Villa, who paid £500 for his services.

Handed his debut in a 4-1 home loss to Manchester United on 2 September 1907, Wallace would go on to play 313 games for Villa, scoring 55 goals. In 1910, he was an ever-present as Villa stormed to the First Division title and was then part of the side that beat Sunderland to lift the 1913 FA Cup – despite becoming the first person to miss a penalty in a cup final.

After serving in the British Army during the First World War, when he also played as a wartime guest for Birmingham, Wallace returned to football and would win a second FA Cup winners medal in 1920 when Villa beat Huddersfield Town 1-0 at Stamford Bridge. In 1920, Wallace finally left Villa Park and joined Oldham Athletic for a reported fee of £1000. He would subsequently play 50 games in all competitions for the Latics before eventually retiring from the game at the end of the 1922/23 season.

Wallace represented England on three occasions during his career, making his debut on 17 March 1913 when they beat Wales 4-3 in Bristol. He won a second cap during a 3-0 loss to Ireland on 14 February 1914  and made a final appearance for his country in a 5-4 victory against Scotland on 10 April 1920.  After ending his playing career, Wallace spent time as the manager of the Aston Villa junior team and would also work as a dressing room attendant and steward at Villa Park. He eventually died on 1 July 1970 aged 85.

Gunner 353675 Wallace attested under Lord Derby’s Group Scheme on 10 December 1915 and was subsequently mobilised into the Hampshire Royal Garrison Artillery (TF) on 17 May 1916. He was posted overseas on 7 July 1916 as part of an anti-aircraft battery before being granted two weeks home leave on 9 December 1917. He was then classified B1 in February 1918 and spent time at camp near Le Havre.

In late December 1918, Wallace returned to Britain on a further period of home leave but was struck down by influenza and admitted to 2/1st Southern General Hospital in Dudley, Birmingham. He would remain there for the next 69 days before finally being discharged from hospital on 10 March 1919. Wallace was eventually demobilised and transferred to Class “Z” Army Reserve on 20 May 1919.

A full list of sources used to create this page can be found here.

This website uses cookies to improve your experience while you navigate through the website. Out of these, the cookies that are categorized as necessary are stored on your browser as they are essential for the working of basic functionalities of the website. We also use third-party cookies that help us analyze and understand how you use this website. These cookies will be stored in your browser only with your consent. You also have the option to opt-out of these cookies. But opting out of some of these cookies may affect your browsing experience.
Necessary Always Enabled
Necessary cookies are absolutely essential for the website to function properly. This category only includes cookies that ensures basic functionalities and security features of the website. These cookies do not store any personal information.
Non-necessary
Any cookies that may not be particularly necessary for the website to function and is used specifically to collect user personal data via analytics, ads, other embedded contents are termed as non-necessary cookies. It is mandatory to procure user consent prior to running these cookies on your website.
SAVE & ACCEPT